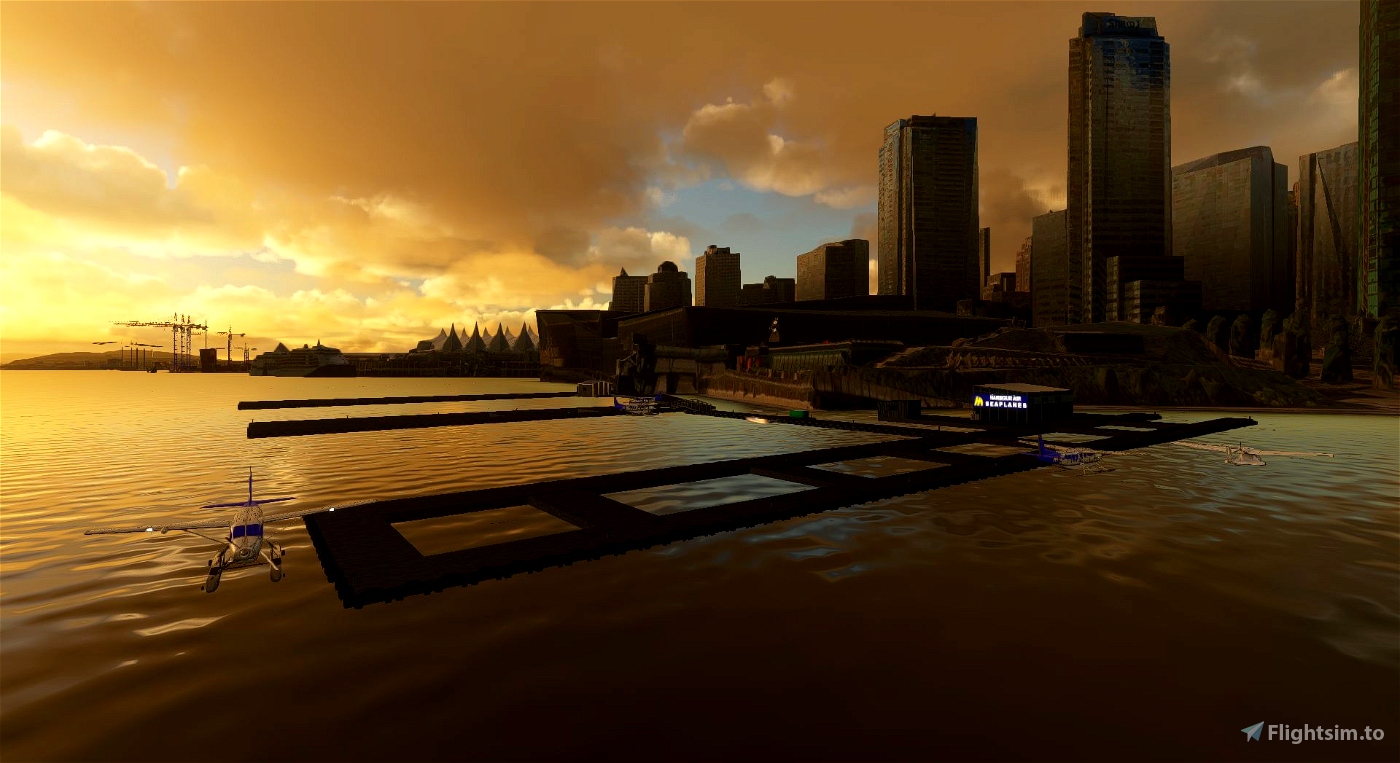 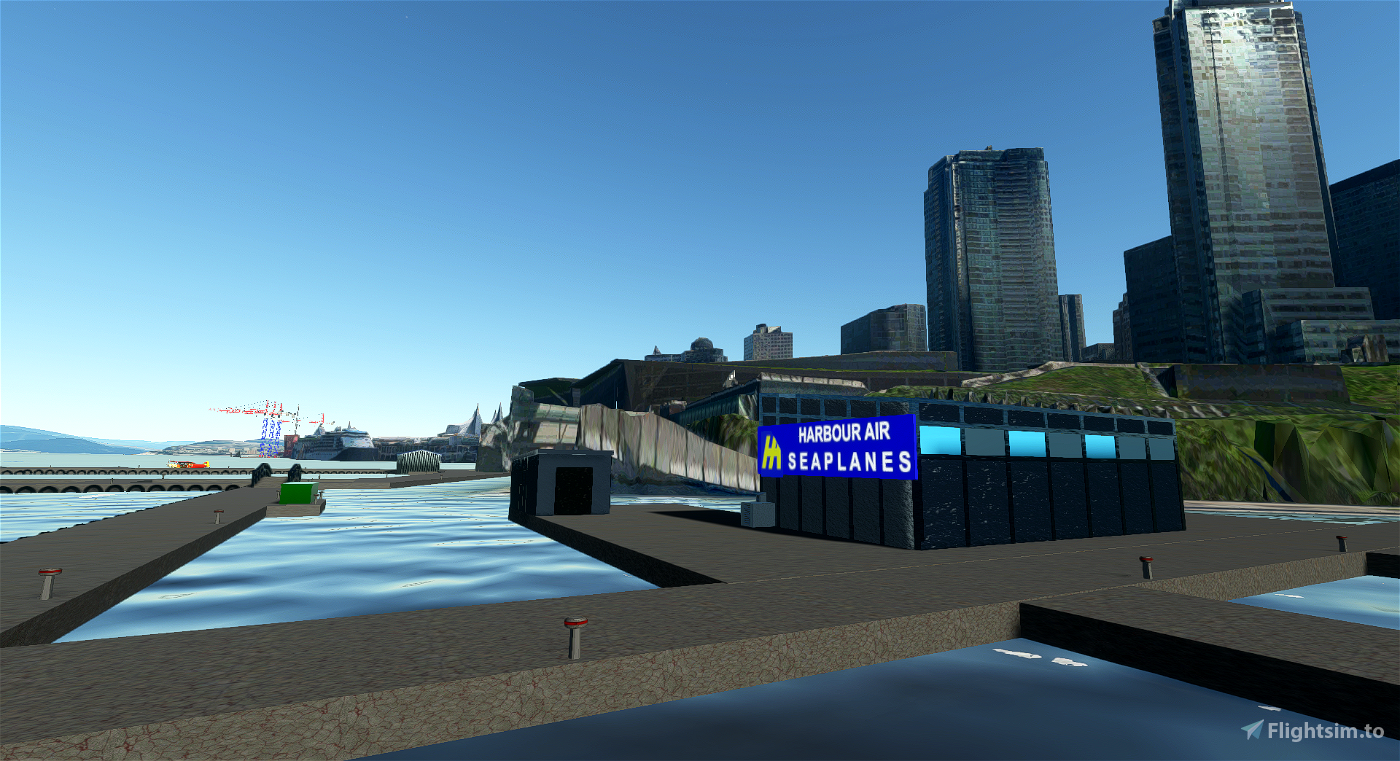 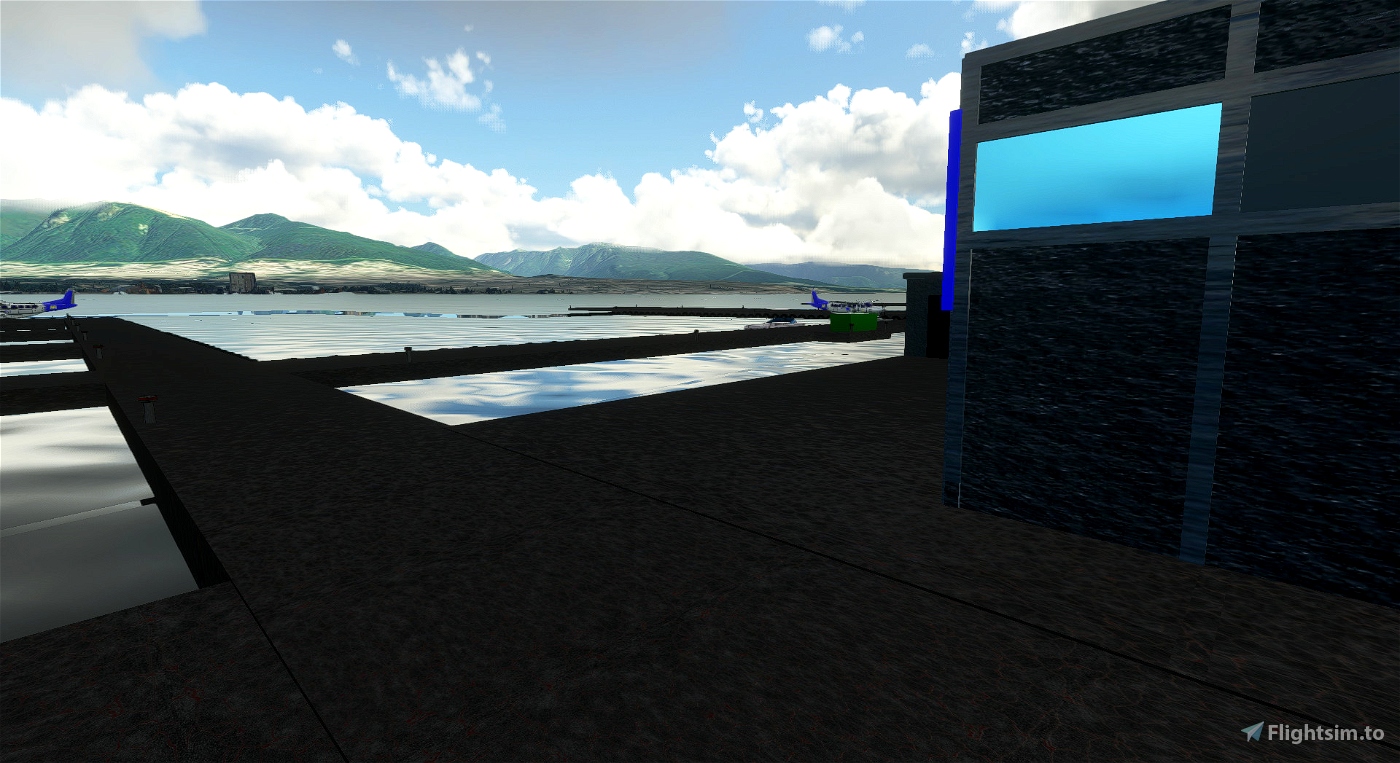 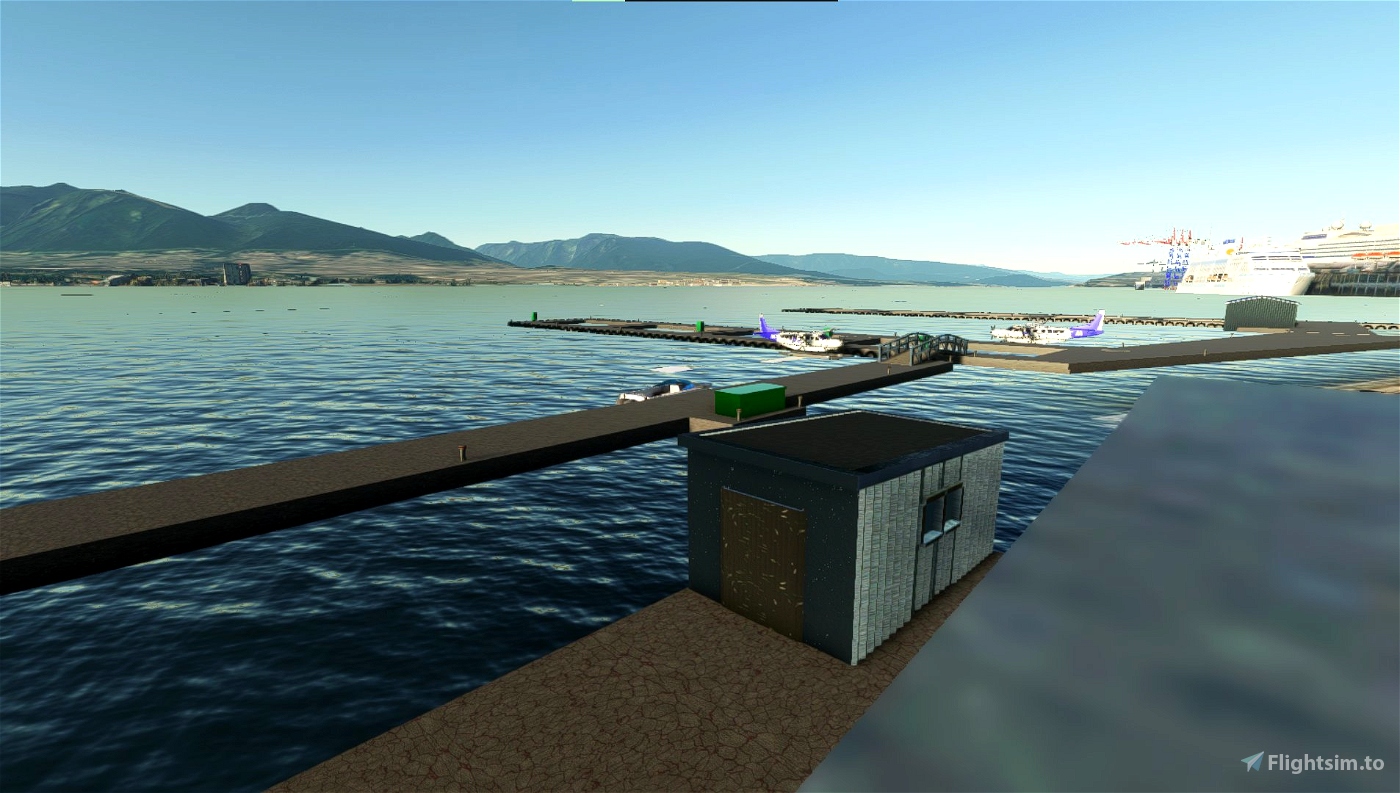 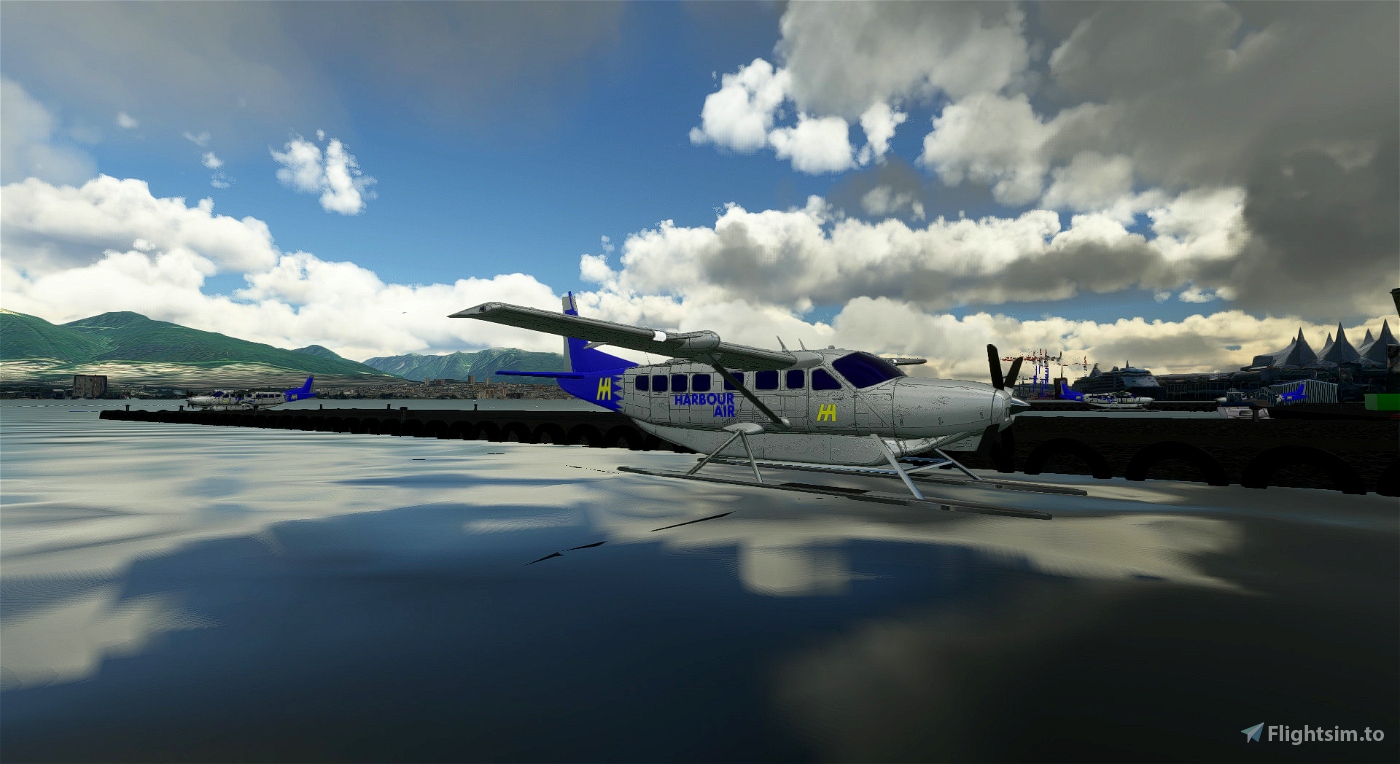 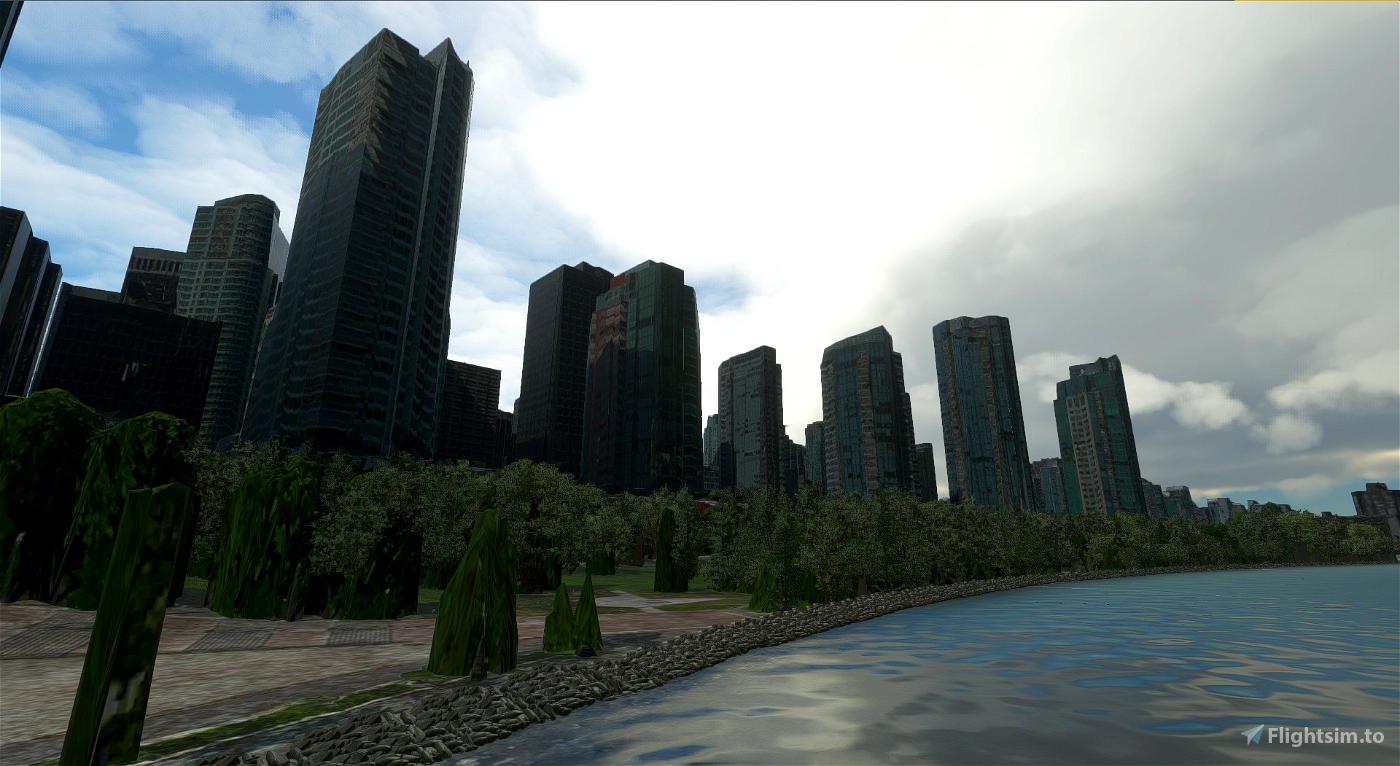 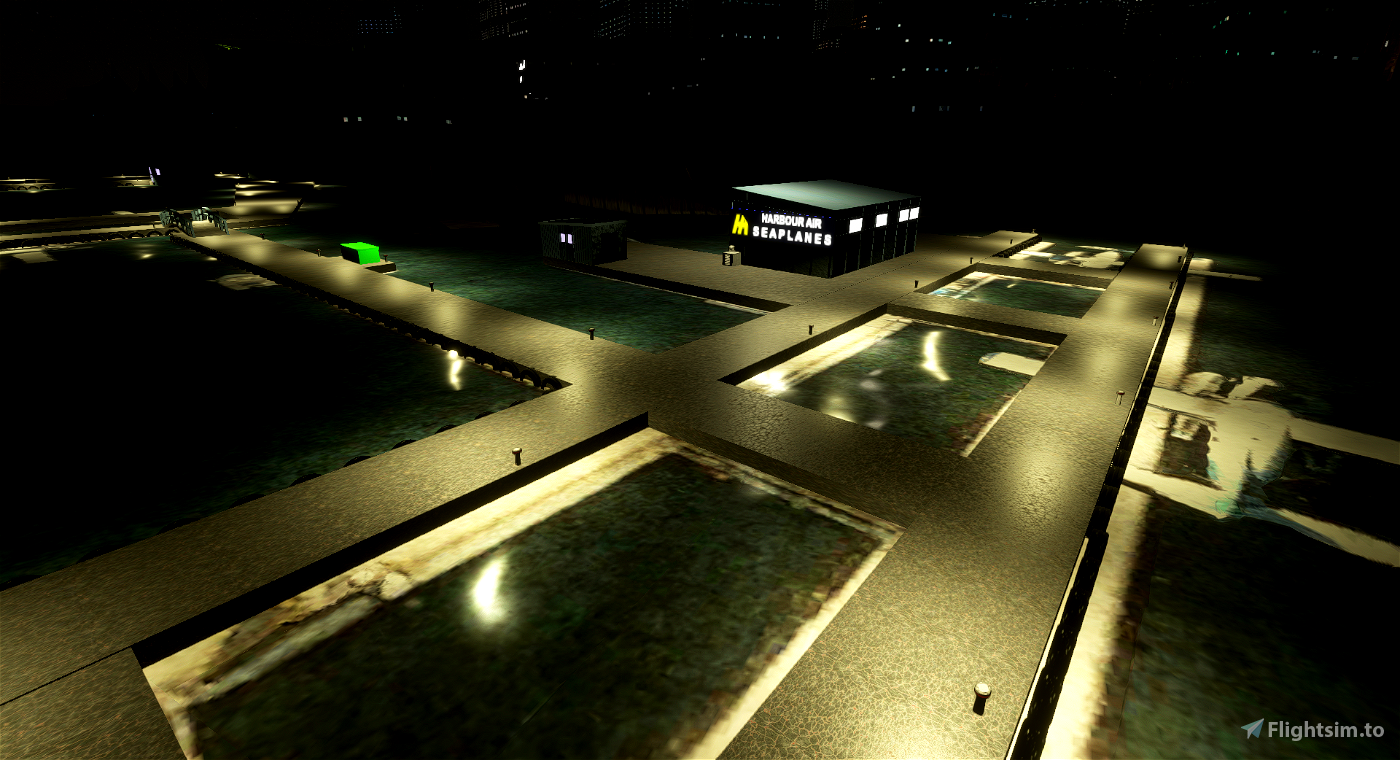 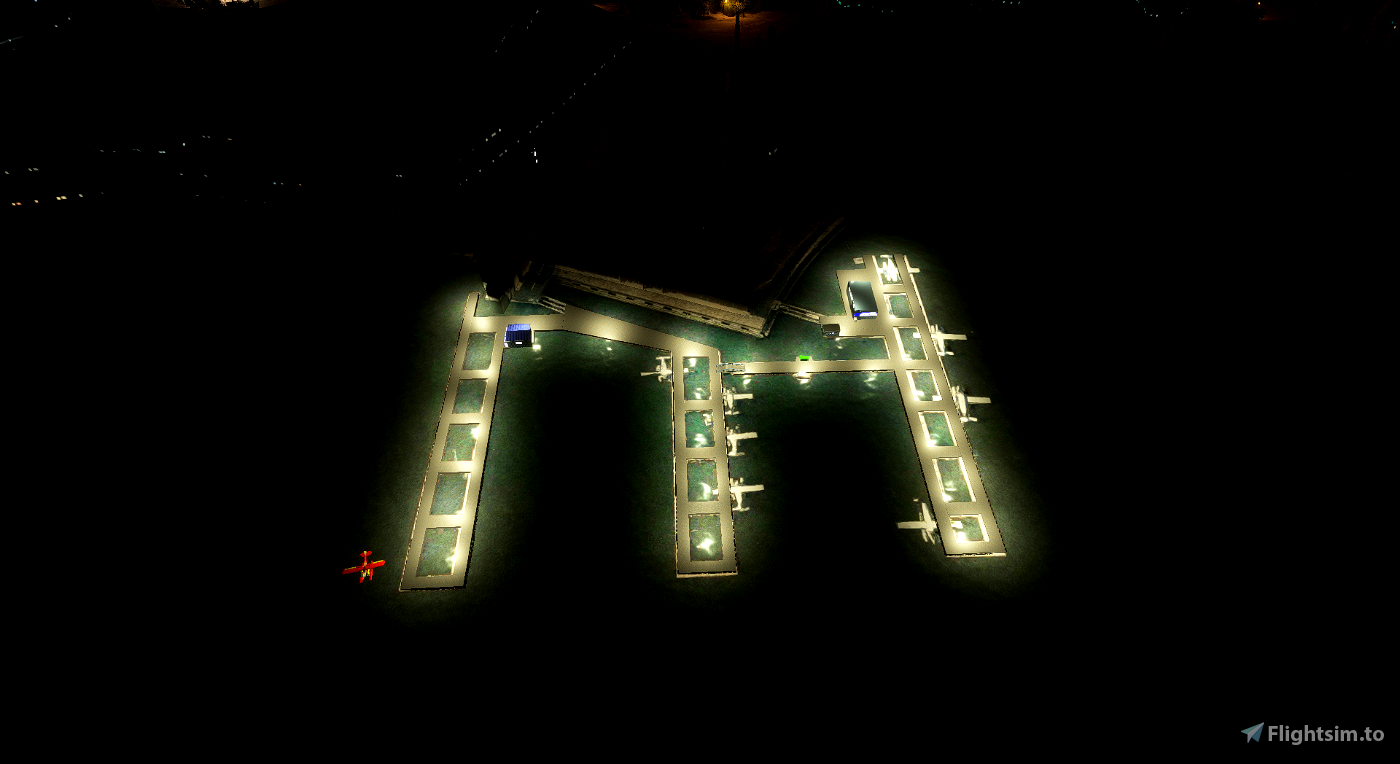 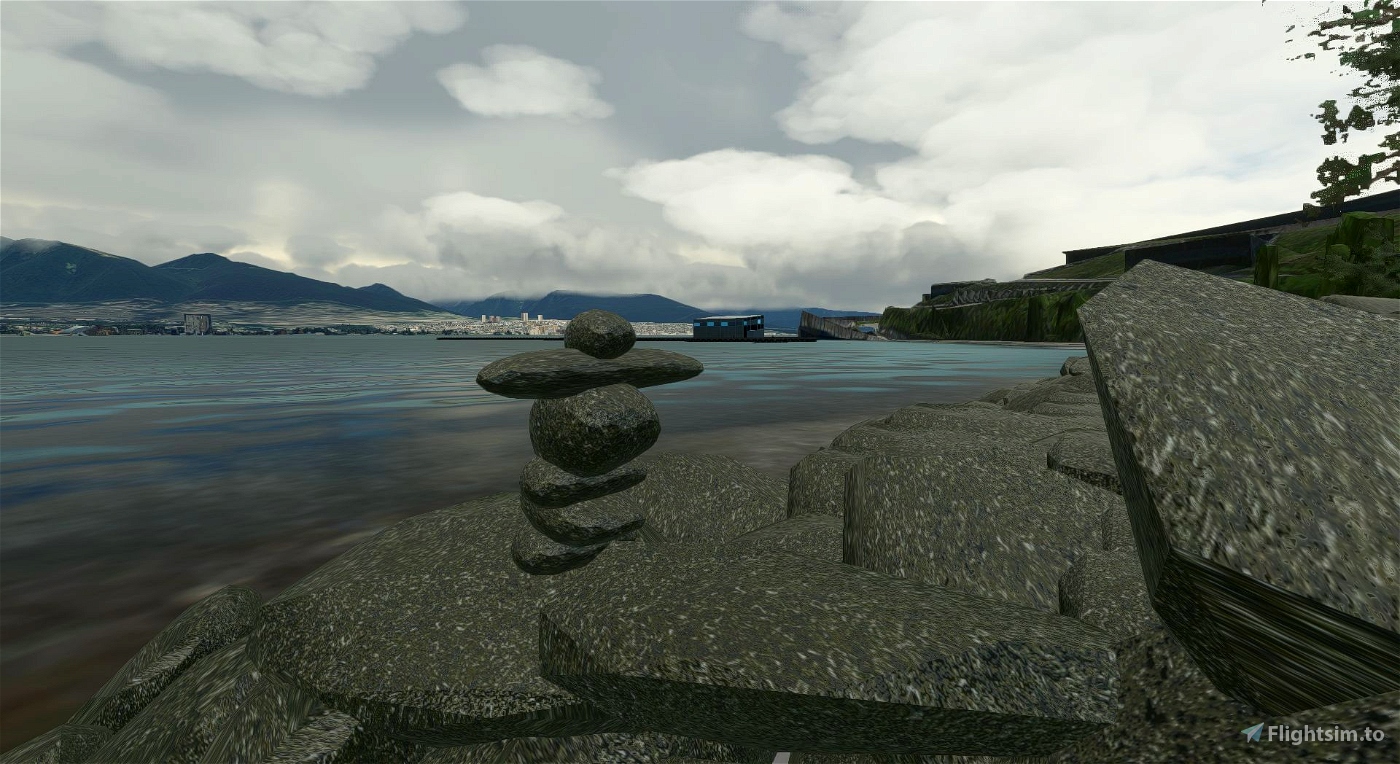 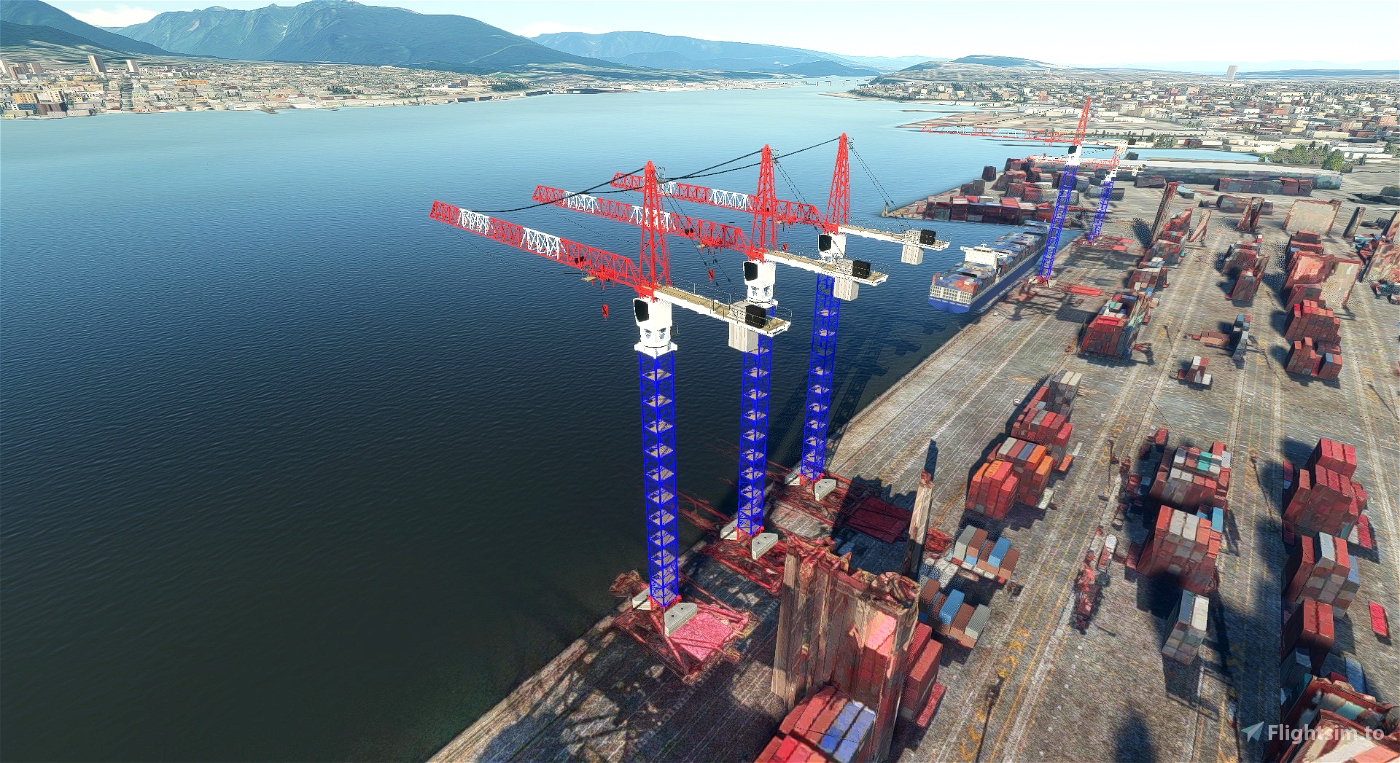 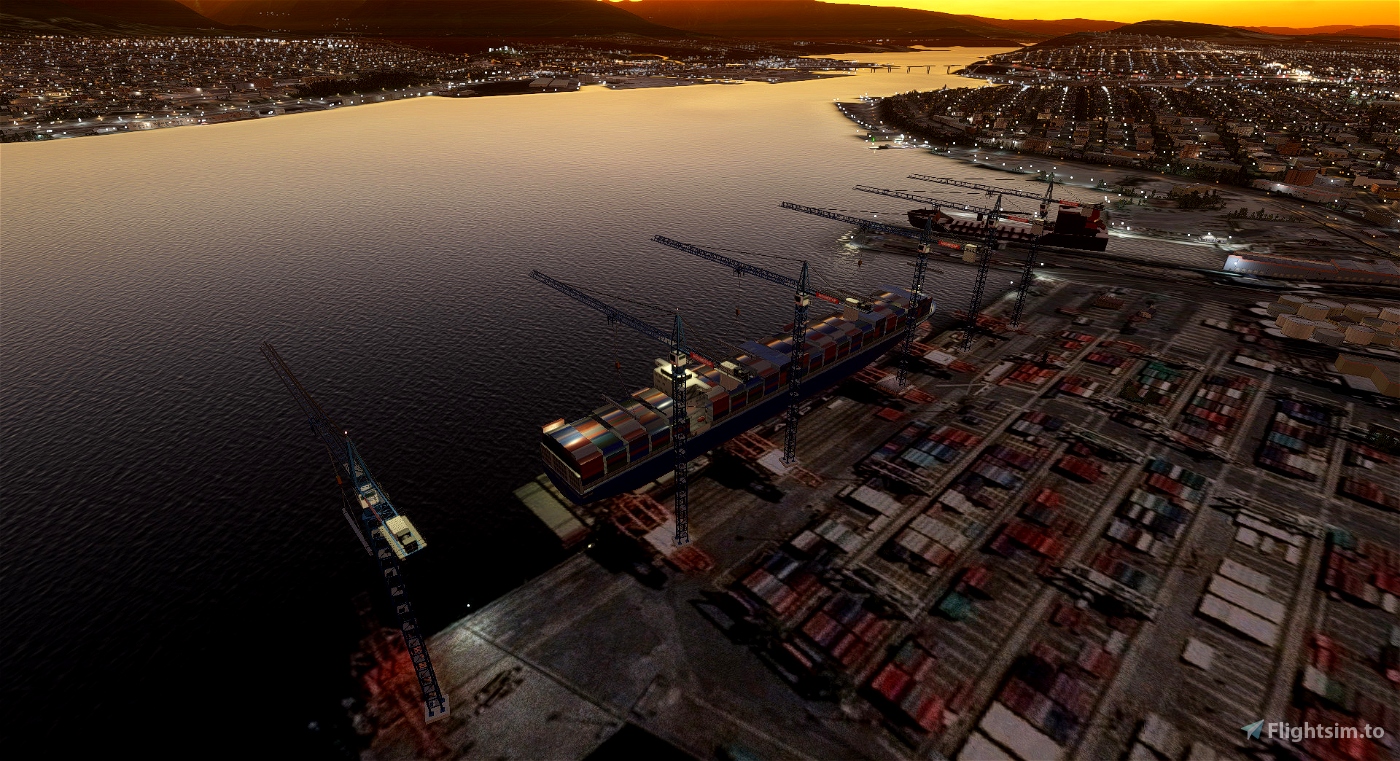 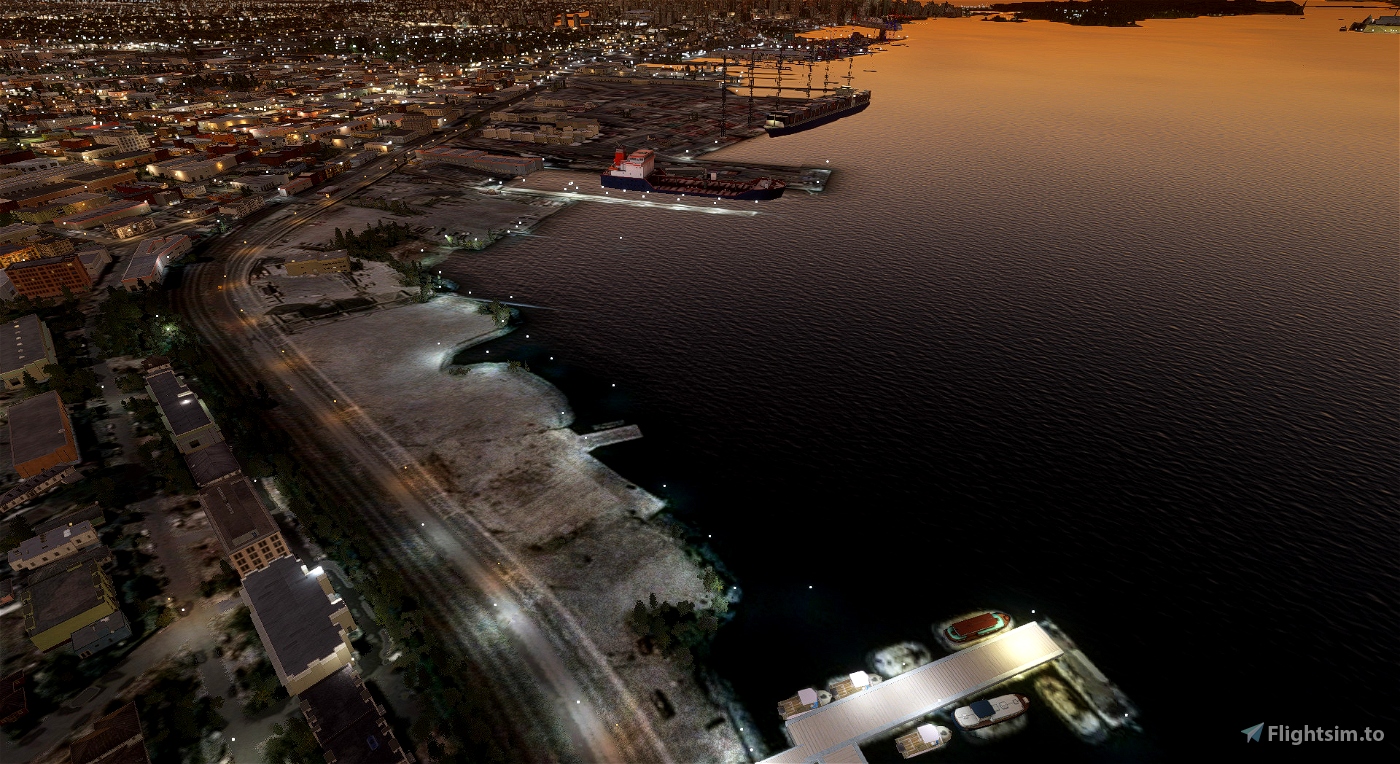 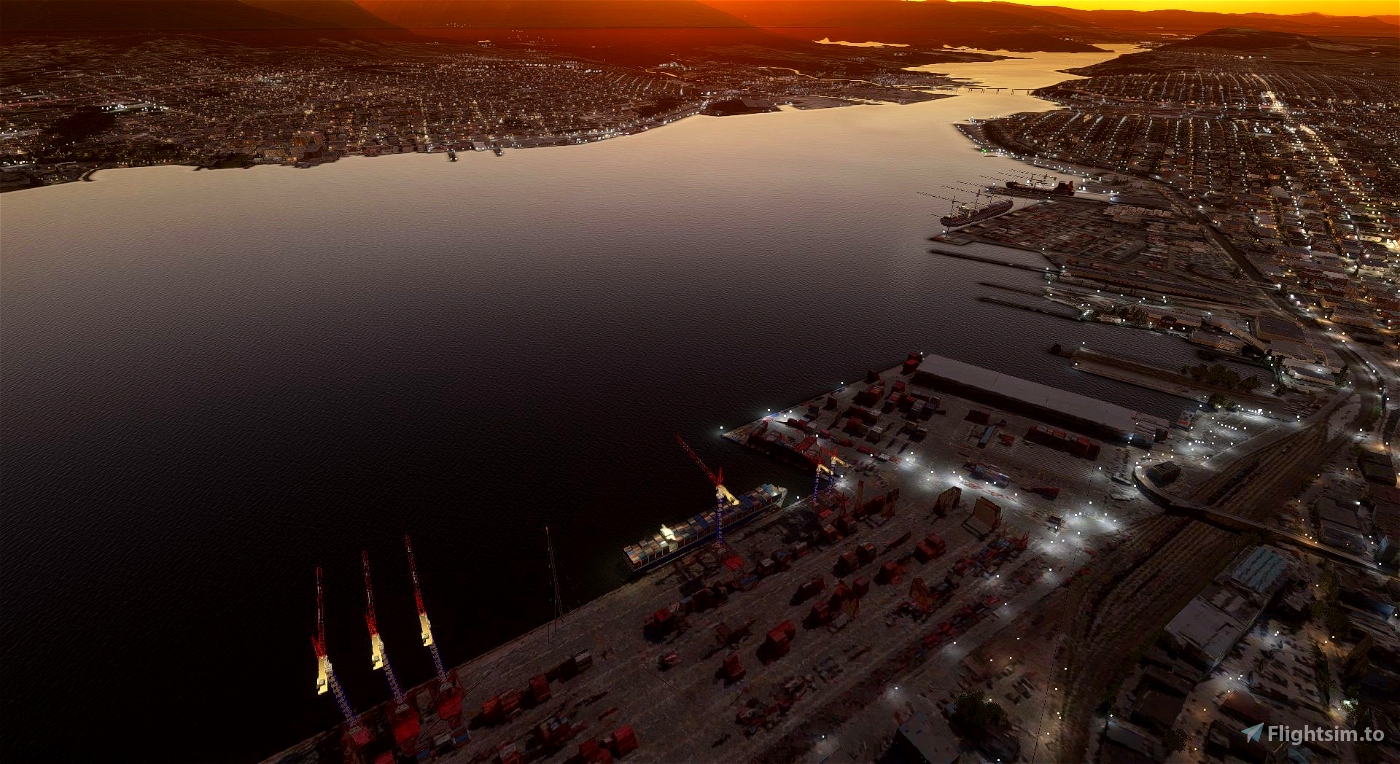 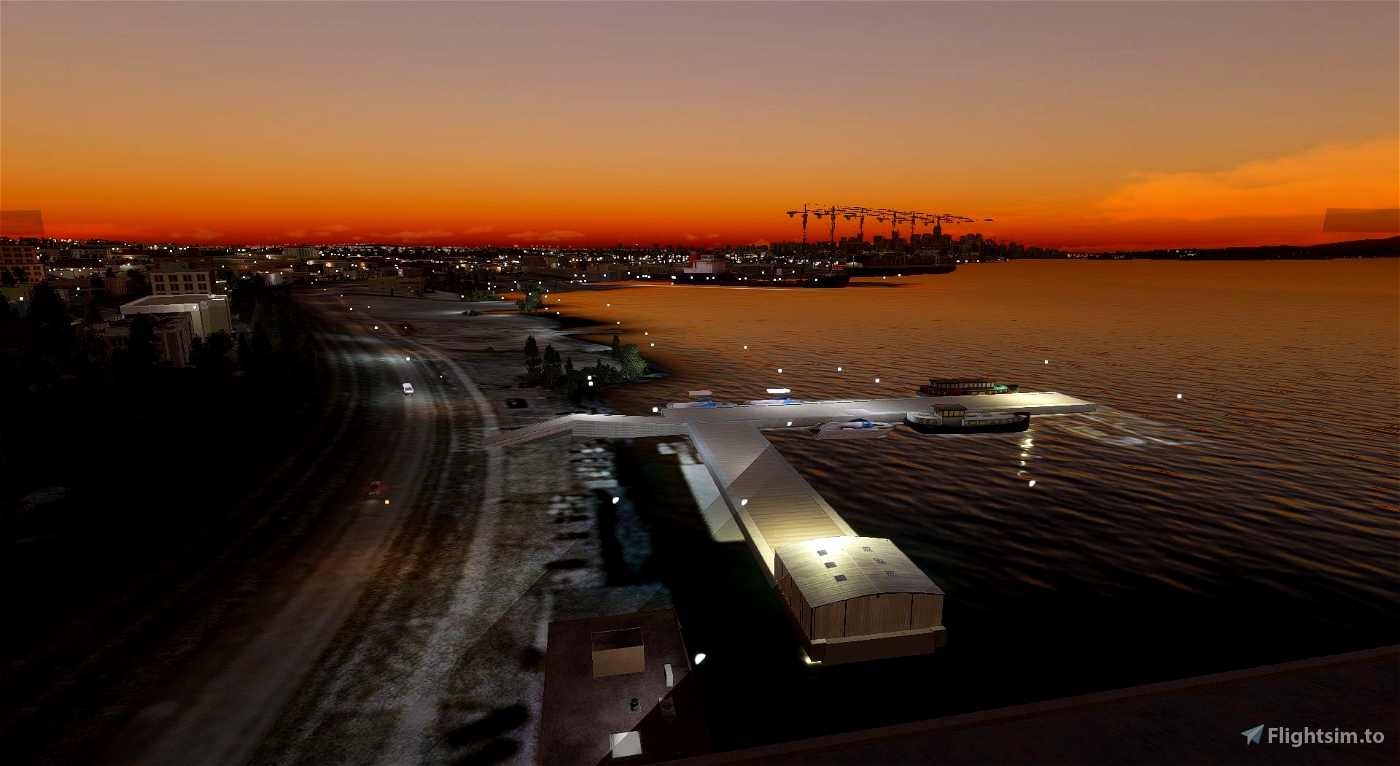 This version of the Vancouver Harbour Flight Centre (VHFC) is far from a fully released version, as this is nowhere near the quality of work I am looking for for VHFC version 1.0

I'm hoping for it to have updates every few days, and eventually we'll get it looking great.

This version only includes the dock as a custom model, you will have to have photogrammetry on to include the main part of the VHFC.

Ships and Ferries traffic will have to be set to 0, unless you'd like to be flying through the ships while taking off, because for some reason ships like sitting around there with ferry traffic at 50%

There will be a payware version of this airport eventually, which will have lots of extra features.

If you wish to report bugs, have any suggestions about anything, want progress updates on my projects, feel free to join my Discord

Or, for suggestions you can also check out the roadmap where you can apparently leave suggestions and bugs with the new update of Flightsim.to!

The Vancouver Harbour Flight Centre is one of Canada's biggest seaplane terminals, located smack in the middle of Downtown Vancouver. This terminal serves quite a number of different airlines, including it's very own Harbour Air, with branches of it including Whistler Air, and Saltspring Air. There also are two other airlines flying here, including Seair and a different SaltSpringAir. It is also Canada's only seabase to have ATC specifically for the seabase itself.

I myself have actually been here in real life, and it is a very nice place to walk around, just chillax or do anything there. The unique buildings and artwork around make it very... unique, although it makes it relatively difficult to model.

This was my first project that is fully made out of textures I completely made myself and the first I have done where pretty much the entire thing is made out of Blender.

This took probably over 20 hours to make so far, so hopefully, you enjoy it and don't forget that this will be improved, so kind of think of this as a beta version.

Stimato 15 Aug 2021 » There's a bunch of Pipes around the Dock IRL, thought I should add those eventually Adding smaller details around VHFC
🕛 Planned

Stimato 16 Oct 2021 » We need smaller details, but they take forever since there are so many since they are small, but very important.
Backlog
Suggerimenti, bug e idee per il futuro.

Which flightsim.to Vancouver files does this scenery work with?

Works with all DEM's of B.C.

Really like it so far, and has a great amount of potential. One thing, some parts of the docks have about 2 inches of space between each part and it’s probably a small thing but is kind of hard to not see, but other then that, I very much enjoy this scenery.

Got it to work, Love It! If your payware includes the Seabus Terminal and a few minor local improvements around Coal Harbour and the Convention Centre, I'd probably buy it. Hopefully someone will come up with some static floatplanes tied to docks one of these days. Helijet is down there (by Seabus) too.

With the payware, I'm trying to add a whole bunch of iconic or random buildings in Vancouver, along with the Helijet, and things like the arena and BC Place and the cruise ship terminal, and of course a bunch of fixes around Vancouver aswell.

I definitely will eventually.

Could you add "Request to transit your area" in the ATC Menu. Required clearance when doing scenic flights over Vancouver... Otherwise an awesome addon to Vancouver!

I'm not sure if I can physically do that yet in the FS, but I'll look into it for sure!

I saw this feature on another airport.. somewhere on the island??? Maybe Comox?

Always good to see Vancouver add ons. Thank you! Look over at the Helijet terminal south of Canada Place. It's missing altogether. If you get around to fixing the cranes at the shoreline (awful photogrammetry), maybe add the Helipad back in. Many of us love the H135 and need placest o land in downtown!

Thanks for your review and suggestions!

I already have a model of the Vancouver Helijet, but I'm not sure how to proceed with it, so I'll have to do some deciding and some improvisation.

You are showing what can be done...

Coal Harbour also needs a clean up, and then the North Shore..

If you follow through with this, you've got a marketable product!

Yup, get a good looking freeware scenery, get customers, and try to sell a fancy version for money, and maybe get money from it!

That's a good idea, some simple cleanups around the area. I'll try that maybe for next update.

Nice addition to the Vancouver waterfront!

Hopefully, someone can replace the awful photogrammetry cranes..

That's an idea. They do look pretty bad

Put some generic cranes there for the time being.

Please note that we can only process copyright infringement notifications if they come from the rightful copyright holder or his legal representative. Law prohibits us from processing third-party requests if you are not the owner or copyright holder of this file.

We need additional details about the allegedly infringing content. The more details and the more accurate, the faster we will be able to process your report. We kindly ask you to understand that we cannot process copyright requests through this form, as we are required to receive such correspondence in the form of a formal complaint via email, signed by your first and last name.

Please note that it is not enough to say that a file has been stolen. We need precise and accurate proof of the infringement.

Your E-Mail must contain this information:

Please send your letter with all required information above to this address:
[email protected]